Currently reading “The Flight of the Heron” which is going slowly, mainly as it is my “bath” read. It was written by D.K. Broster, a woman who had worked as a nurse in WW1, and later worked as secretary to the Professor of History as Oxford writing this book in 1925. My copy dates to the compulsory read from my Grade10. Thus, it is (softcover), yellowed, very soft and pliable as a whole (will roll easily into a small tube), with a gentle smell of book. Back in the day, I never did really understand it or its historical background, but was very taken with the romance between Ewen Cameron and Alison, and would skip large tracts to where their names stood out together.

Now, I am loving the historical context which Broster drew beautifully. I now understand that the English held Edinburgh castle, while The Pretender (to the British Crown)’s son, Bonnie Prince Charlie, passed through Holyrood House, (where W and I will see Queen Mary’s bedroom soon), separated by The Royal Mile.

Loving subtlties like Gaelic place names, as well as terms of endearment, e.g mo cridhe, meaning ‘my heart’. And also Scottish fey, or superstition……..the Flight of the Heron and its portents were predicted by the ‘taibhsear’.

66 years later, Diana Gabaldon published Outlander. This, too is strewn with gaelic terms, especially of endearment. Here is a great list of some. 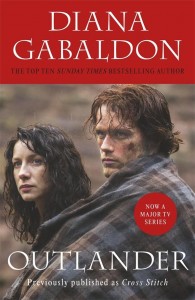 More of Outlander, Claire and Jamie later, to be sure.