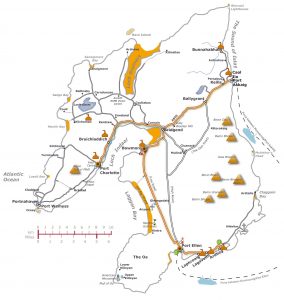 From Oban, we westered to the ferry at Kenacraig. For obscure reasons, it was re-routed to Port Arisaig at the northern end of the island, rather than our destination at Port Ellen on the southern end. It was a happy occurrence, anyway, with Port Arisaig (remember Viking word endings?) being a dear little Port with not much township, followed by an orienting drive down to Port Ellen.

We stayed with Joy, owner of a B and B called Askernish. Our room was delightful and large. The house had been the local Doctor’s Sugery in not such distant memory – we had the Surgery Room and our bathroom had been the Dispensary. On the opposite side of the hallway was The Waiting Room! “The Doctor” had successfully treated many an ailment with the medicine in The Black Bottle. Joy says when she moved into the premises, many a local asked “did you ever find that Black Bottle, and work out what the recipe was?”. W was fairly sure the local whiskey would have been a prime ingredient!

We fell in love with Joy…would like to have bottled her and brought her back!, and Port Ellen and all of Islay. Those people of the West WERE canty and couthy and kindly the best. I knew they would be……

(Sadly the population of Islay is in decline. The most recent census, taken in 2011, recorded 3,228 residents in 1,541 households. This was down 7% from the 2001 census, which recorded 3,457 residents in 1,479 households. This translates into a population density of around 14 people per square mile. For comparison, Eden in Cumbria, the least densely populated district on the mainland, has over 40 people per square mile.

Unaffordable housing and a lack of job opportunities have been the driving forces behind Islay’s depopulation and it is the young that are being forced out. Argyll and Bute council has been trying to address the former problem by building properties for rent in Port Charlotte, Port Ellen and Bowmore. After farming, whisky distilling is the island’s second largest employer and there are no fewer than eight active distilleries, with a ninth planned. Bruichladdich itself employs over 70 people now, making us the largest private employer on the island.

Islay’s population peaked at 14,992 in 1831. By 1900 it had halved, partly thanks to the enforced evictions of the so-called Clearances when estate-owners realised that farming sheep would be more profitable than acting as feudal overlords for indigenous farmers, and the decline has been remorseless ever since. Canada and the US were the most popular overseas destination for Islay’s emigrants.)