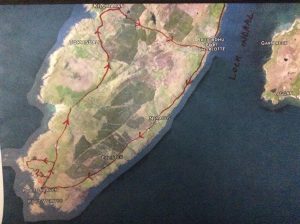 We drove on after the woollen mill to Portnahaven, looking for a Celtic Craft shop. This involved driving around Loch Indaal which opens into the Atlantic. Full Gaelic name for Loch Indaal is Loch na dala, meaning loch of delay….shipping often had trouble getting into the loch and were delayed days or weeks.

Portnahaven on the end of the peninsula is immediately adjacent to the village of Port Wemyss (pronounced weems). These villages were artificially established to give crofters, removed by the Clearances in the early 1800’s, an alternative occupation i.e., fishing. They shared the Portnahaven Church, built in 1823 (still operating, and very well preserved). It will be noted that there are separate, adjacent entrance doors for each village, and the interior seating is also divided for each village….unbelievably quaint! Also treated to watching two Grey Seals basking close offshore….these guys are LARGE!

On the advice of the Craft shop man, we did a small loop back to the road, to see the view, descending off a hill, looking into the ruggedness of the Atlantic coastline, the sea glistening with sunshine. He suggested a longer, more beautiful drive back to Port Charlotte was to do another loop, rather than retrace back along the loch. Wow! What scenery. No cars passed, but cows and sheep on the road, lovely rolling hills and V-shaped pieces of ocean visible. Another treat was turning the radio on for 20 minutes and listening to BBC Gael, without understanding a word. Towards coming into Port Charlotte from the rear we encountered numbers and numbers of walkers. Joy informed us later,”Oh, yes! It’s Walk Islay Week!”