Some or many of you may be uncomfortably breath-holding wondering when the heck this trip ends. Well, this is it, with a few final thoughts and references.

It has totally embellished my already unimagined-ly wonderful trip, to create and write this blog, and it also forms a modern-style keepsake of my own. I have paid for, and own the website until I decide not to, so I will not be closing it down yet, but at some point, may post my own reviews of TV and film favourites, usually that I am enjoying at the time. Anyone with a similar interest may also contribute. Please, if you need to, perhaps as exhausted as W and I became with the travel, jump off and “Unsubscribe” – no hurt feelings. Similarly, feel free just to continue. There will be a pause……Love to all those who hung in there and made the distance to here.

I could easily spend more time in Paris, I could easily see more in Scotland, would love to follow Hadrian’s Wall and the Antonine Wall, and ??? see the Orkneys, the Shetlands, and island hop the Inner and Outer Hebrides…….there must be genetic beacons still calling….perhaps I have inherited Anne’s Scottish fey – she, who was generally so rational, and of the Scientific Method, was also convinced (she did give anecdotes!!) she was endowed with the Scottish second sight.

Mum left a couple of pages of she and Hal’s plans (hand-written) for their drive around Scotland. Some will know, esp J, Uncle B, Auntie L, and G, that her hand-writing was outright cryptic, requiring great study and determination to translate. But I did translate, and know that she hoped to visit the graves of grandfather Halley’s father’s parents at the cemetry in Crief.

Day 5 – St Andrews to Perth or ? Pitlochry, over the Tay Bridge to Dundee. To Glamis and into Perth. Make Glamis a detour to get back and climb Kinnoull Hill on way into Perth. Ask about Cemetery.
Drive out to Crieff – Barvic, (? a small mountain stream) near there was where Charlotte McCulloch Halley was born in 1813.
Dunning, south of Perth, was where her husband William Halley was born.
Look for Halley in phone book.
Both are buried in Wellshill Cemetery, not far from the north-east corner.

Wellshill Cemetery is easy to find on GoogleMaps, no doubt the graves are too, with the north-east corner guidance. As Mum’s notes are prospective, I do not know if they ever found the graves….perhaps other family members may know, if it was discussed amongst them back then……

I would love to have seen The Great Tapestry of Scotland with its beautifully crewelled embroidery story of Scotland, many pieces, each forged by folk, recently, in different towns of the land into a whole. 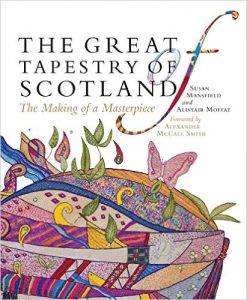 It is amazing to me that the population of Scotland is only some 5 million, yet the Scottish diaspora around the world is collectively 100 million!…..clever survival-ing stock whereever they are…there is a Scottish Diaspora Tapestry, too.

I ponder the skill of knitting, which Mum started teaching me as a very small child…..her mother, Susan, no doubt taught her, I am guessing her older sister may have taught her (although, it just might have been her step-mother). It may thus have been passed down to Anne Brown Lawrie by she and Susan’s mother, another Susan, née Brown. How far back might it have been passed down as a female skill, before it was really a male skill being passed down, Men knitting sea-worthy jumpers made from unscoured wool still containing lanolin……any-hoo, Jen, Rob, Tom, and extended family representatives, we are all looking at you to perpetuate that family skill into the next generations!! I think cousin RS and I are the holders of the skill in our generation, both of us still very active at it! CS reminds me that her husband, J, found Scottish family forbears who were Flax Weavers, resonating for her, with her own chosen weaving craft. Perhaps this skill proneness has genetically found its way from there to C…….

Getting a bit excessively sentimental and small tear-y, now…….unexpected later life loves……those exquisite hills of Scotland, its people, the pizzaz of Paris…my incredulous gratitude that the people of Scotland so graciously share their country with tourists literally crawling all over it in fresh waves each year for the last couple of hundred years.

Great idea, Mum, to do this, it has been fantastic fulfilling it……here’s to you (and your forebears) and Dad and your road trip of Scotland…. and ours…..and this small, hand-chosen, loved group of readers……..xxoo

Even leaving Paris was exciting with the live camera on the belly of our Cathay Pacific plane streaming our take-off on to the back of the seat in front of us…….

Hopping off the Batobus at the Musée d’Orsay stop, we had already decided to pop in to look at Le Musée Nationale de la Légion d’Honneur. I had originally wanted to go into Le Musée d’Orsay to see the art within, but it was the last day, I was now exhausted, so a quicker look at the smaller gallery was chosen.

What a wonderful museum, not prominently on the Tourist list. Entrée involved a small circus with the Concierge who, conspriring with a wink to W, made a flamboyant comedy of checking Madame’s bags. This finished with his coming around his desk and planting a hug upon me, to which I blushingly said “Oh, Monsieur, L’Amour!?”, to which words, he seemed a little bashful!

The history represented in here was fascinating, the art exquisite, and the medals also exquisite. The medals were beautiful and I would imagine very expensive to the State.

This wonderful sojourn ended all to swiftly, with a guard suddenly announcing early closure. I remarked that the closure time on signage was several hours away, to which he replied “revenir demain!” Sadly we would not be able to do this.

A further encounter with our lovely Concierge recovered my parcel containing some gifts for adult children, he folding the bag with dramatized exaggeration, exactly as it had been presented, “Je retourne ce cadeau pour vos enfants adultes, exactement, Madam….Hon!Hon!Hon! ( a French laugh!)”.

The Batobus travels under about 18 of Paris’s 37 bridges. They are no less wondrous from beneath, than from side-on or above.

We opted for climbing the stairs of the Eiffel Tower, rather than queuing to buy tickets for, and then get on the lift. It was a good decision for us, both for the satisfaction of completeing the climb and descent, to and from the Second Level, in the end, but also, for the close-up views of the incredible geometry and symmetry of La Tour. No wonder Les Parisiens and Les Français could not deconstruct and remove it following the 1889 Exposition Universelle.

W’s nephew told us that one of the feet has needed some bolstering as that area beside the Seine was originally a very boggy area.

W has a nephew who lives in Paris with his beautiful Parisienne wife and two small children, aged 4 years and 2 years. It was a longrange plan to go out to dinner with them while we were in Paris. E and S live in an apartment in Puteaux near the high-rise business district, usually a 25 minute drive. However leaving at peak evening hour by taxi, we found ourselves in traffic jam crawling along the gauche bank road beside the Seine, taking an hour to get there……not entirely unpleasureable…

(I found Paris taxi drivers dependent on, and greatly relieved by, an exact address, rather than this hotel or that hotel, which they put immediately into their GPS, which one can also watch from the back that we are not taking the long road round…..)

Their children were with E’s parents for the week, on school holidays, so it was four for dinner, much aided by E and S being known by the local restauranteurs. S, W’s nephew, is a consumate lovely Aussie guy, who willfully and happily holds on to his Aussie accent when using his small grab-bag of French. Naturally, les enfants are French speakers, with 4 year old son being a “fluent” understander of English.

Initial greetings with E corrected our tendancy to – one kiss, one cheek – pulling each of us in with a twinkle in the eye for a compulsory kiss for each cheek!

In approximately 1967, a preloved Reader’s Digest compilation book containing half a dozen ‘condensed’ novels arrived at 124 Alexandra Rd, and into my ken. The novel which took my eye was “Naked Came I” by David Weiss, written in 1963. I was transported by the descriptions of Auguste Rodin’s powerful sculpting and by the high romance and sexual charge with his muse, confidante and model and lover, Camille Claudel. Never to be forgotten. (Imagine, had I read an unabridged version!)

Taxi to the Musée Rodin, followed by a walk to and along the Seine, finishing with a Batobus ride with turn-around at la Tour Eiffel, first sight up close, and back to the Notre Dame Batobus stop, with a quick walk home to notre Hôtel.

It would be evident by now to all readers that this trip has been my dream…….so, much amour et merci to enabler, happy complier, and great travel companion, W.❤️

We are in Paris for three nights surrounding two days…….not wasting the first evening, we walk two blocks from our Rive Gauche hotel, Hotel Agora Saint Germaine, 42 rue des Bernadins, 5ième arrondissement, then across the smaller Pont L’Archevêché directly to Notre Dame. It is about 7pm with softly fading sunlight, and a full moon……

A final brief drive back into Edinburgh, an incident free return to Hertz renta-car, pretty much in the centre of the city, no dints on the car to report……so grateful to this iPhone/Siri/Maps, and Vodafone $5 a day. Know we could have had gps in the car, but they are often dodgy writing co-ordinates in, and…. Siri and I know each other…..

How did Mum and Dad do it 40 years ago with small-m maps!

Quick taxi back to our excellent Fraser Suites and Our Last Scottish Supper back around the corner in the Royal Mile.

We were able to have one land trip connecting our around the world ticket…..catching the Virgin East Coast train, from Waverley Station, Edinburgh, which averages 200kph and takes 4 1/2 hours, to London. It was lovely to have a quick comparative snapshot of English countryside. The transit, of a few steps from King’s Cross Station to St Pancras Station, was easy. The English Channel Tunnel was about 15 minutes of black tunnel, with sudden emergence into France, countryside, villages and homes of which, at least in this area seemed similar enough in style to that which we had seen in Britain.

Taxi from Gare du Nord to l’Hôtel was immediately hair-raising with taxi-driver manoeuvring impossibly deftly across a chaotic blocked intersection. I was able to bring out my French and say, “Monsieur, vous êtes brilliant!”, which started a conversation in French which took us all the way to l’Hôtel, the taxi driver explaining he only had school English, moi, only school French, and agreeing en français, that the traffic in Paris was second only to the chaos of traffic in Italy. He asked if my husband spoke any French….Non, zéro! Perhaps a little over-excited by now, I farewelled him with Nous Sommes Paris, Monsieur!”. (I mislead re W’s French…..he was adept at using Bonjour, spoken beautifully, and a version of Merci, which sounded like a southern United States drawl….  “Merr-cy!”. )

Using the French language has been the best fun…….