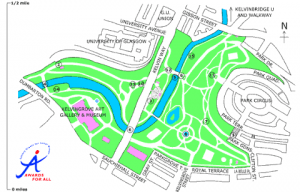 With one day in Glasgow only, our cherry-pick was a walk along Kelvin Way past Kelvingrove Park to The Mackintosh House (or the Hillhead House) at the University of Glasgow. It meant missing the the Kelvingrove Art Gallery.  So much to see; however, it opened an hour later, so on a coin toss, we walked from our hotel on Sauchiehall Street along Kelvin Way to University Avenue, to the earlier opening Mackintosh House.

Kelvingrove Park has large statuary commemorating some of geniuses who have done their work at the University of Glasgow, Lord Kelvin, of Absolute Zero being -273 deg C., Baron Lister who revolutionized antiseptic surgery. The inventions and contributions to the modern world by Scots is truly staggering.

My awareness of  Charles Rennie Mackintosh started when W and I bought a Mackintosh Lamp, a first joint acquisition within the house. 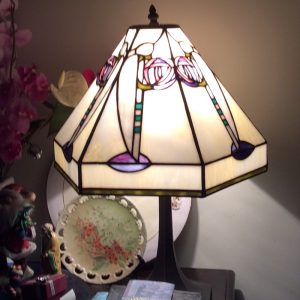 Charles built the (now restored interior) home we visited, for his wife Margaret in the style which they, with Margaret’s sister Frances and her husband, James McNair, developed. It was lovely to be immersed briefly in their style. More of Margaret and Frances exquisite work.

We saw so little of Glasgow and its River and Firth, the Clyde.

Shipbuilders on the Clyde have built 25,000 ships since the first yard opened in 1712. At its peak there were 30-40 shipyards. Clydebank produce 370 ships in 1913. Likewise in WWll, it was very productive, but suffered severe damage from the Clydebank Blitz from Luftwaffe strikes. The homelessness of tens of thousands resonated for decades. Today, there are four shipyards left, one making advanced technology ships for the Royal Navy and other navies.

Hats off to Glasgow.