The drive, Glasgow to Edinburgh, is less than two hours in all. There is a lot to fit in, on this, the last day in Scotland……first stop Stirling Castle, the bloody heart of Scotland, militarily of old, the most strategically important part of Scotland, gateway to the Highlands.

It is hard to describe the shock of excitement, after driving for a while, of seeing the National Wallace Monument striking itself out from a tree-covered hill. 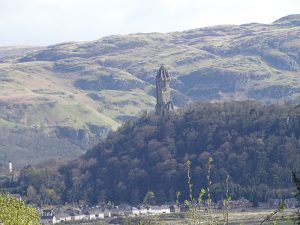 This is my photo at first sighting

The tower stands on the Abbey Craig, a volcanic crag above Cambuskenneth Abbey, from which Wallace was said to have watched the gathering of the army of King Edward I of England, just before the Battle of Stirling Bridge. The monument is open to the general public. Visitors climb the 246 step spiral staircase to the viewing gallery inside the monument’s crown, which provides expansive views of the Ochil Hills and the Forth Valley.

There is so much history in Scotland, but also millenia of atrocities carried out. Wallace, this 13th century hero was punished for his success at Stirling Bridge, with the standard hanging, drawing and quartering, boiled head on a spike and body on display at two different sites. The collective Scots memory did not forget…. What a striking, powerful monument erected in the 19th century. The thrust and power of National pride is evident.

The Old Stirling bridge, to be seen in photos in the next post, was built in the late 1400s, and has been closed to wheeled traffic since 1831. A series of wooden bridges stood there before, as in 1297 (Wallace’s Battle of Stirling Bridge) when the English were routed as they crossed, 2 by 2 horsemen. Wallace waited till there were about 2000 Government troops across before attacking, a number they knew they could defeat. The wooden 1297 bridge was 60 metres upstream from the 1400 Old Stirling Bridge, which we see today still.

Immediately after seeing Wallace’s monument, we took a wrong turn which placed us at a parking (and turning spot) at the base of Stirling Castle, adjacent to the remnant’s of Charles1’s garden. A surprise tound every corner.