I think the need to do this must be part of a late mid-life review……!!

Over the years, Mum made it known to me with regularity, that she was re-reading The Forsyte Saga, and indeed, in her last few years… again! (with selected others), “one last time”. She had come to feel so attached to the characters, especially the old Aunts, at the Forsyte ‘Change gatherings, that each reading was like visiting loved and familiar family again.

I must have been late teenage when, in 1968,  the black-and-white Forsyte Saga series came onto TV, probably bargaining permission to watch rather than study. I additionally adored those same characters through film, thought Irene (pronounced Irenie) exquisitely beautiful (the actress also had an exotic name  – Nyree (née Ngairi) Dawn Porter, a New Zealand actress). I have ended up loving both reading Galsworthy’s first trilogy, with its two interludes, and watching the 1967 TV series. Perhaps about 1992, I read The Man of Property aloud to Jen. Also listened to an audiobook version several years ago, while cooking in the kitchen. 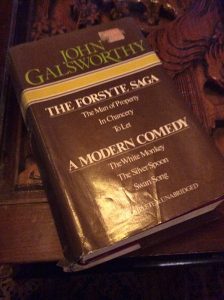 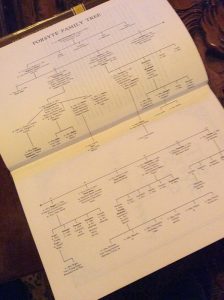 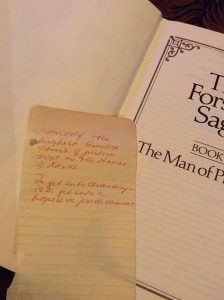 Anne left numerous bits of paper with messages, I am sure, not only for herself, but me also. With the above note left within my copy, I am very clear now, what “In Chancery” really means……”to get into chancery, to get into a hopeless predicament…”

I also came across the two interludes in the 1990s. These copies are both very satisfying as they are very old, with all the sensual embellishment which that brings. I am not sure if they were originally acquired in Mum or Dad’s household, editions being 1934 and 1935 respectively.

Indian Summer of a Forsyte…….it is Old Jolyon’s Indian Summer……aged, alone at Robin Hill (then outside London) with grand-daughter Holly, while Young Jolyon is abroad, unexpected companionship and delight occurs with visits from his nephew Soames’s estranged wife, Irene. As the end of his life approaches, his perception of beauty and love is sharpened. He indulges and basks in the beauty of Irene herself, the home at Robin Hill (built originally for Irene, by Irene’s loathed husband Soames, the Man of Property), and the beautiful surrounds of the countryside. I could almost feel the soft warm stillness of the summer air, perfume of the wildflowers and buzz of bees myself…….so evocative. At the end of the book, Old Jolyon passes away, sitting in his chair under the great old oak tree, waiting for Irene’s arrival (imagine her full Victorian summer dress and umbrella) walking up the road to see him, he feeling so content, with the dog Balthasar at his feet, which faithful devotee alerts us to that passing with his whimper and howl……such a beautiful step aside from the main story. The words “Indian Summer” entered by own lexicon then, understanding them and on occasion using them, always for something spiritually uplifting, special, and late in the season…..I remember an Easter at Straddie which felt like an Indian Summer.

Of course, “The soundless footsteps in the grass!” is Irene arriving to find her unexpected friend had died in his chair awaiting her…..

Awakening was similarly delightful, and which mothers of sons may find secretly dreamy and affirming. It is narrated by little Jon, the son, the truelove child of Irene and Young Jolyon, as he comes to realize how beautiful his mother is (Awakening), and that at once she is his, but also has to be shared, particulary with his father, about which he comes to terms. Irene is a lovely spirit, wafting (I imagine with soft skirt rustling) in and out of his daily life….we see her only as  his mother-presence, not directly, as with her more detailed formed self, in the main story. In spite of his new awareness and anxiety, she is his child’s ultimate comfort and reassurance. Jon, too, basks…… 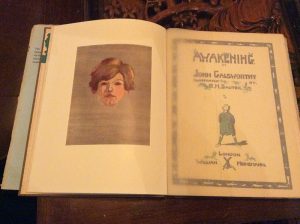 I love it that “Sentiment” only gets allotted half  point nearly at the bottom, the rest being high adventure. How little boy!❤️

The anatomy of Jon’s heart has changed forever……that which was a vacant plot has now been entirely filled by “Mum”. One notes that this is just marginally larger than the plot for Dad, which has been assigned of old.

Having now re-seen a lot of film which, somehow, in spite of an excessive focus on study and education in early years, I did manage to absorb…..I realize now that the stories’ characters have become my old friends. It brings the realization that film and books have been very important to me, unconsciously back then, with re-viewing and re-reading now bringing nostalgia, even aspects of grief, for the old days, for absent family and similarly for the absence of the characters when the book is finished or film ‘glut’ is over.