I bought this book to give to a dear friend for Christmas…….but have been so immediately entranced with it myself, that I know now she is not getting it, this being Feb 2. I will lend it with my book plate in the front!

It is available in all formats, hardcover, softcover, and ebook. I have the paperback version, and as usual, the tactile and visual elements of the book are meaningful to me. This one is printed in the USA on smooth, pleasing paper. The spine is firm, so I CAN roll it into covenient shapes sitting or lying in bed without any major damage (this facility also produces an additional tactile memory for the book, a specific “well-read” recall). Inside, line-drawings, and the painted cover picture, all by renowned Brisbane maritime artist Don Braben,  and the photograph on the front cover are each entrancing. No doubt, the cover painting represents this Ballina Boy fishing in the Richmond River from the boat jetty; it is alongside a photo of his blond-headed self at about age seven in the left hand lower corner. A rapid flick through the pages reveals that the book is interspersed with the most charming black and white line-drawings, enticingly and deeply redolent of my own childhood. There are family and school photographs in the middle. It is well annotated also, with numerous fascinomas! I find this all so striking, as even these visuals must be only a degree or two of separation from those of anyone who grew up in this part of the world in this era. “While the story is largely set in Ballina and the Northern Rivers, it encompasses Brisbane and Queensland provincial towns including Rockhampton, Bundaberg, Toowoomba and Pittsworth, as well as some international destinations.”

The Author’s current photo is on the back cover, where he is described:

“The son of a country doctor and classicist, Roger Allen inherited his father’s love of medicine and languages. After graduating from the University of Queensland, Roger specialized in chest diseases and sleep medicine in Melbourne, and became a recognized authority on sarcoidosis. H is currently in private practice at the Wesley Medical Centre, Brisbane and he also teaches medical students. Roger’s interests include family, sailing, military history, medical research and writing.”

Within the book, the young Roger’s early life is described in generous warm and affectionate detail,  sharing his family and family life, his halcyon days in Ballina. All the senses are triggered, with visions of boyish excursions, fishing, family travels, bird life…pelicans, azure kingfishers, Regent Bowerbirds, Powerful Owls. Depths of context are offered with his historical family history, local history, sympathetic acknowledgement of contemporary and past local Aboriginal history, and Roger’s youthful questioning of the religion.

This charming book is replete with so many reminders of my own childhood…..Billy Tea, the Hill’s Hoist, the FJHolden, bodgies and widgies, outhouse “dunnies with red backs, huntsmen and daddy longlegs”……..Christmas beetles, the Breakfast Creek Hotel, Crosby Road, Bartley’s Hill, Ascot State School, the gasometer at Newstead, Eagle Farm aerodrome, Lancaster Road, Oriel Park with the old steam roller, the Ascot tram terminus, lead paint, the gas copper, gob-stoppers, Cracker night with Throw Downs and tupenny bungers, Clag paste, yo-yos, Red Rover, hoola-hoops, Iced Vo-vos, White Australia, “Two to the Valley” (I was specifically explained this so-Brisbane-Australian colloquialism with humour by my own father, at a young age!), Tele! Tele! City Final!, McWhirter’s, T.C. Byrne’s and Finney’s, television in 1959, the Australian loss of innocence with the kidnap and murder of Graham Thorne, Sputnik………this book deserves a very wide readership! 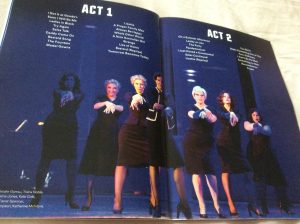 On Saturday, I went with favourite daughter, Jenny, to see the musical, Ladies in Black at QPAC, my Christmas present from she and Nick. I had taken little notice of what we were to see, as the main event was an outing with HER. But what a treat ……..set in Sydney in 1959 in the frock department of Goodes (à la David Jones), with themes relevant today as then, and, what can one say, the music, composed by Tim Finn, brilliant. So happy and uplifting. Again, so many reminders of one’s own youth…..

The original inspiration was a book by an Australian expatriate, Madeleine St John, who was living in London: The Women in Black. It was the first of her four novels, and the only one set in her homeland. She based the story partly on her own experiences, but also those of a friend. Now on my Goodreads: Want to read list! 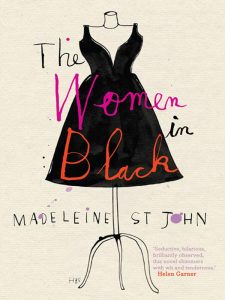 Carolyn Burns, playwright, along with Simon Phillips, director, and Tim Finn, music and lyrics, developed this new Australian musical for Queensland Theatre. It opened with seasons in Brisbane and Melbourne in 2015, and has just started an Australian National Tour. It won the 2016 Helpmann Award for Best New Australian Work.

A lazy lift from Wikipedia re great reviews, follows:

“The musical was very positively received.

The Age called Ladies in Black “a unicorn of the stage: a full-blown, home-grown musical that actually works” and “probably the best Aussie musical since Priscilla went global”. It wrote: “Tim Finn’s songs range from Broadway-inspired big numbers to true-blue ballads, from witty patter songs to shades of blues and jazz standards. They’re beautifully integrated with the dramatic action, and the comic lyrics are priceless.”

The Australian stated that Finn “has approached Ladies in Black with such wholehearted sincerity and creative generosity …creating an immensely engaging score filled with gorgeous melodies that make you care about the characters singing them.”

ArtsHub indicated that “a comedy of mid-20th century manners, Ladies in Black is a paean to an optimistic future – the future of an uncomplicated gender equality and seamless multiculturalism. But Finn’s canny lyricism transports the play from its late 50s context to a subtle but salient comment on social issues of today.”

Well done to all the great creatives involved – there are many, cudos to Brisbane, Queensland Theatre, Australia, and a dab of New Zealnd!