My trusty iPhone 5s has lead us from Anstruther through St Andrews again to Dundee across the Tay River over The Tay Bridge. The Scots have built some beautiful, remarkable bridges in more modern times like The Forth bridge and The Tay Bridge, as well as beautiful older stone bridges, as well as amazing railway viaducts at Glenfinnan and Culloden. Of course some of the roads and bridges in the Highlands were built by that Irishman in the English Army, General Wade. I gather he is regarded as having been brilliant opening up the wild and woolly Highlands with military roads and bridges, many of which are still in use 270 years later.

Of the hundreds of castles in Scotland, I thought it was important to see Scone Palace (pronounced Scoon), as it was the site of the coronations of Scottish royalty, and original home to The Stone of Destiny (upon which stone Scottish Kings and Queens sat).

We were not allowed to take photographs within. One of the caretakers whose surname was Lawson, said he had relatives who were Lawries, and that his mother was born on the coast near Buckhaven. He said I hope you enjoy the Palace, cousin!

Some 15 years ago, my mother recounted what a lovely road trip she and my father had had in Scotland, and, in particular, they had toasted each other and the trip while staying near ? at the golf course in St Andrews…. it WAS back in the Day in 1978, when , maybe it was affordable to stay there.

She then suggested that Warwick and I might do that trip one day, and to toast ourselves and the trip similarly, and she and Hal at St Andrews, then, if we made it. Well, we made it……..

St Andrew’s was both booked out and prohibitively expensive to stay in, so we have retired back down the coast to the fishing village of Anstruther for the night.

Following a lovely stroll on the boat harbour wall, we had a seafood dinner where we were staying at The Waterfront (Restaurant and Accommodation).

Anne and Hal were toasted at dinner.

Please, click on To Anne and Hal below, and forgive the little evidence of dinner near the speakers mouth…….the camera man and producer is not aware of such things😵

To Anne and Hal

We have hired a Ford Focus, which has 6! forward gears and reverse, making for very slow starts if the gear stick is accidentally in 4 instead of 2 at intersections, and reverse occurs if you pull the gear stick UP! (our 40 year old recall was to push it DOWN!, so driving out of Edinburgh was a bit hair-raising for a few hours, especially until I pulled out the iPhone GPS. Have found that using the gps is only very slowly eating into my data allowance, so it is enormously adding to ease of getting around! Forget maps!

Also, indicators and wipers on opposite sides to our cars, so the wipers were switched on routinely going around corners for the first day…….🙄

The car also snuffed in the middle of a large roundabout. I sat with eyes closed waiting for the car to be hit from behind. W says there were a couple of cars who pulled up behind and were very patient.😖

So exciting driving over the Forth Road Bridge and Seeing The Forth Rail Bridge.

First stop stop was pulling in to the lovely beachside village of Burntisland, for a cuppa in a cafe with some elderly locals, and a walk on the beach.

We drove through Kirkcaldy, which was a small city, so no stopping – stopping is stressful, in terms of finding a park ( especially without reverse being elucidated yet), and the more built up areas being harder to negotiate.

Next stop, Buckhaven, where Granma Halley was born, with a walk around the headland, and also photographing East Wemyss, across the bay (for Meryl). Wemyss is pronounced Weems.

On to St Andrews for a walk through town, and the ruins of the old St Andrew’s Cathedral; then an icecream, and retiring to the beautul fishing village of Anstruther for the late afternoon and evening. (It doesn’t get dark till about 8:30pm.) 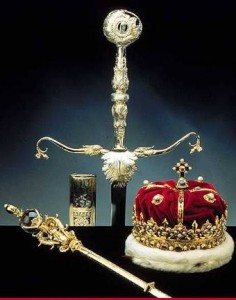 The spirit wants to stuff the travelling schedule VERY full, but the body is weak….. Cherries have to be picked. So, I had to choose Edinburgh Castle over Holyrood Palace. I think I would have been a Jacobite two hundred and seventy years ago…….that which is Scottish should be kept and defended against the English, or wrested back from them and held most dear. The Scots justifiably wanted, and gained, a couple of times, Edinburgh Castle, but mainly the English have held it as a fortress against the Scots. Holyrood Palace, at the other end of The Royal Mile has stayed more Scottish. Queen Mary slept at Holyrood Palace, as does QE11 when she’s in town.

Edinburgh Castle was hotly contested, especially during The Scottish Wars of Independence, 14th to 18th centuries; there have been 26 seiges in its 1100 year history.

The Castle acknowledges the Scottish heroes, William Wallace and Robert The Bruce, placing  statues of them to guard the gates. The Palace part holds The Honours: The Scottish Crown Jewels, Crown, Sceptre and Sword. We were not allowed to photograph in the room holding these. I was not ready for how breathtakingly beautiful these were………..

Had a great walk with our flamboyant, charismatic guide, Jen, through The Old Town of Edinburgh….

The Old Town was a walled city of a square nautical mile, housing 80,000 people. Buildings were built up and down in height to accommodate this number. The wall, Flodden Wall, named after the famous battle, was a fortress against The English!

The contents of the chamberpot was thrown from upper windows calling out “Garde loo”, which was a mispronounciation of the French, Gardez l’eau. From this we have our “colloquial word “loo” for the toilet. Human waste flowed dowhill into a lake, which filled itself in eventally, now the site of the wonderfully fertile Princes Street Gardens.

Between the sandstone buildings are a network of circuitous lanes called Closes. There are courtyards behind some of the buildings in The Royal Mile road, which has Edinburgh Castle at one end (hotly contested for by Scot and English, finally English) and Holyrood Palace, the palace of Scots royalty, now where QE11 stays when in town).

Under the brooding watch of the Castle was the Grassmarket, a hurly-burly market area, also the site of hangings.

I think G told me that Granma Halley loved Tablet. I have bought Tablet, whiskey Fudge, and Shortbread for driving snacks. VERY rich, most will come home. We have had haggis twice and enjoyed it, and had North Sea seafood twice…..? Atlantic seafood soon. We have found the bread delicious, and also had excellent shortbread, including some from our whiskey walk guide’s mother!

The Halley family certainly produced some great cooks and bakers. This morning I asked our lovely maître d which cookbooks would the Scottish home cook have on her shelves, and she came up with the following:

“Maw Broon” was a famous comic strip, and Broon is Scottish dialect for Brown, i.e., Mother Brown. There is an online comment about this latter book, that the traditional style of cooking presented is why Scotland has such a high risk of heart attack! Recipes like Forfar Bridies and Clooties, containing suet!!

There is a great online list of Scottish recipes on the rampantscotlandwebsite. Warwick and I shared a Cranachan with raspberries and shortbread at The Blackfriars Pub in Edinburgh. It was yummy.

Today I bought these at the Culloden Visitors Centre. 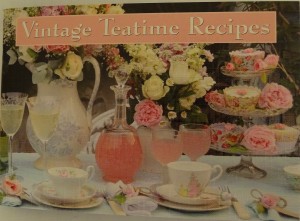 The day started with a long, getting lost walk to a Post Office, followed by walking to the National Museum of Scotland to see their current exhibition, Celts.

The exhibition was very good. I had exited the exhibit to the main museum, bought small goodies at its shop, had a cuppa, to return to exhibit area to wait for W, who was still meticulously pouring over each item, when an alarm went off. Slowly and with orderliness, and quietness, and NO general announcement, everyone in the building, many hundreds, coverged on stairways, and poured out onto the street outside. (A photos would have been fascinating, but I was in the moment…). The streetscape was already restricted by fences and roadworks. W and I had found each other with a phonecall. Having both seen and thoroughly enjoyed the exhibit, we decided to just go back to our room for feet-up, rather than wait to go back in. No photos of the fascinating building internal due to swift unexpected ejection. We will never know if there was a fire, a bomb threat or a false alarm. Impressed with Scottish behaviour during an alarm!

Another whole day would have been happily required and spent, to see The History of Scotland part of the museum.😕

I have been making some posts “public” thinking it is easier for readers, and unlikely others will stumble across it; but sometimes I think there may be a question of copyright, so when in doubt, I will protect it with a password. The first email you ever received had your username and password, but simply, it is your first name by which I know you, (except one friend who additionally has the first capital initial of her surname), spelled with a Capital. Everyones PW is tammie124

Great amenities at Heathrow Airport and Edinburgh airport. Seriously poor shops and eating at SF airport. Both SF and Heathrow did a high degree of mutiple types of security check. Brisbane and Sydney security only do random checks other than X-raying one’s hand luggage. The Australian excuse, it would take to long to do everyone, not looking world standard…..

I am always the profiled low-suspicion little aging gray-haired lady chosen for bomb and metal detection, to obscure the fact that they are profiling to some degree…

Our British Airways flight to Edinburgh was delayed due to a medical incident on the previous flight, and a wait for a wheel-chaired person. Thus when we ordered a small bottle of wine- each during the flight, the hostess gave us 2 each. W felt we should drink them both so customs didn’t take them off us (really?),  so I was moderately under some inluence at the end of the 50 minute flight, when the Firth of Forth appeared…..an unfortunate confluence of circumstances, as weeping started…no doubt contributed to by tiredness, but also feeling overwhelmed by the notion of return by subsequent generations, following the family Scottish diaspora of two generations ago.

Dear new-friend Libby, looking south-east from Edinburgh, and thinking of you, and your mother from East Linton. I notice that the population of East Linton at the 2001 census was 1,774 (and that in 1881, it was 1,042). It has only one church, the Prestonkirk Parish Church, rebuilt in 1770. It formerly had a free church (St Andrews), a Roman Catholic Church, St Kentigern’s, and a Methodist Hall. No doubt your mother sat at one of these, perhaps the Prestonkirk Parish Church. Preston Mill, an old watermill, is on the outskirts. There has been a mill on the site since 1599, and it is still working.