W has a nephew who lives in Paris with his beautiful Parisienne wife and two small children, aged 4 years and 2 years. It was a longrange plan to go out to dinner with them while we were in Paris. E and S live in an apartment in Puteaux near the high-rise business district, usually a 25 minute drive. However leaving at peak evening hour by taxi, we found ourselves in traffic jam crawling along the gauche bank road beside the Seine, taking an hour to get there……not entirely unpleasureable…

(I found Paris taxi drivers dependent on, and greatly relieved by, an exact address, rather than this hotel or that hotel, which they put immediately into their GPS, which one can also watch from the back that we are not taking the long road round…..)

Their children were with E’s parents for the week, on school holidays, so it was four for dinner, much aided by E and S being known by the local restauranteurs. S, W’s nephew, is a consumate lovely Aussie guy, who willfully and happily holds on to his Aussie accent when using his small grab-bag of French. Naturally, les enfants are French speakers, with 4 year old son being a “fluent” understander of English.

Initial greetings with E corrected our tendancy to – one kiss, one cheek – pulling each of us in with a twinkle in the eye for a compulsory kiss for each cheek!

We are in Paris for three nights surrounding two days…….not wasting the first evening, we walk two blocks from our Rive Gauche hotel, Hotel Agora Saint Germaine, 42 rue des Bernadins, 5ième arrondissement, then across the smaller Pont L’Archevêché directly to Notre Dame. It is about 7pm with softly fading sunlight, and a full moon…… 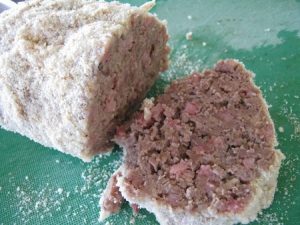 I recall Anne Lawrie from time to time making Aberdeen Sausage. Anne was, I suppose, a simple cook, but always tasty, for the family. She was a regular cooker of a roast, beef, lamb or chicken, for Sunday lunch. In her kitchen, it was the lamb roast which raised the possibility of an Aberdeen Sausage, which would provide a tasty sandwich filling for my father’s lunches the following week. He found this item very moreish. My tastes as a child were too fastidious to accept what I would so happily have now. Suspect John was the same….

Auntie L reminds me that Granma Halley and other Auntie L were also regular makers of Aberdeen Sausage. The mincing of meats involved the cumbersome clamp mincer being attached to the kitchen bench. The boiling of the sausage for Anne’s recipe meant prior rending of an old white cotton sheet (I can still hear it!) into just the right size for rolling the sausage mince, and tying with string at each end. I am pretty sure that she used her pressure cooker for the boiling, shortening the usual 2 hours boiling.

There is no doubt that it was an Old Scots recipe, which came into Australia with many Scots migrants, so may have come into Granma’s household via Halleys, Lawries, or both.

The recipe is well described in The Schauer Australian Cookery Book, which very dilapidated book was my mother’s main recipe book. I believe either Auntie L or Auntie C gave Mum her copy when she married. The book was written by Miss Amy Shauer, with her cookery book resident in many Queensland kitchens through to the sixties. Miss Schauer’s biography is quite inspiring during the first half of the 20th century. If I was ever enquiring about a cooking question growing up Mum would always say, “Get the Miss Schauer!”

I think it is worth transcribing the whole recipe, substituting left-over lamb for beef, as that is what it was in our household (also described on Visit Dunkeld as “This is an old farmhouse recipe which used up the end of the barn”. (Isn’t that a quaint turn of phrase?)

Mince 1lb left-over lamb and 1/2lb bacon ends. Put into mixing bowl, add 1 cup of fresh breadcrumbs, 1tablespoon Worcestershire Sauce. Season with pepper and salt. Add 1 egg. 1 minced onion and carrot may be used. Mix all thoroughly together, turn onto a floured board, knead, form into a firm sausage. Place into a dry pudding cloth, roll smoothly, tie at each end, sqeezing the sausage into as small a compass as possible from each end. Tie tightly and pin cloth in the centre. (This tight rolling makes it firm for carving).

Place in a saucepan of plenty of boiling water. Simmer slowly for 1 1/2 to 2 hours. Take up, stand 5 minutes in cloth. Remove cloth carefully. Roll in dry breadcrumbs. Garnish with parsley.

The above was as Mum made it. Miss Schauer continues:

Meat such as raw minced mutton, veal, rabbit, chicke, etc., may be used instead of beef. The remains of cold corned beef are good used instead of fresh meat. Three sheep’s tongues boiled, skinned, minced and mixed in with beef or other meats is an improvement. 😳 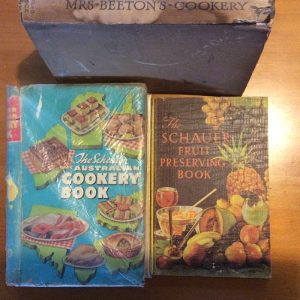 Frequently, our accommodation included a FULL Scottish breakfast. Such is pictured below. Truly, this is what the full breakfast ALWAYS was! 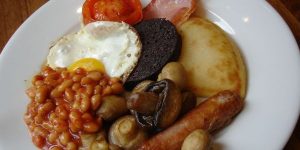 After having eaten haggis with dinner on two occasions, AND enjoyed it!, I have double checked the recipe ( deliberately didn’t afore, knowing globally that it was grim😒….the chief ingredient is ….A sheep’s pluck!…..ie., liver, heart, lungs…….can still manage haggis, and proud of it!

Moving on, I had accidentally read that black pudding – an essential ingredient of…the FULL Scottish breakfast…….was pig’s blood. Recipes seem to start with:

4 cups of pig’s blood…………😖………..🐖😪, so neither I, nor W, were able to accept black pudding on our breakfast plate, without regret, being already very self-satisfied about the haggis ingestion.

Neither of us are fans of tinned baked beans, and I do think we were being served the generic out-of-the-packet potatoe scones from the supermarket, recognized as not the best breakfast tattie.

So my breakfast plate was as above, minus baked beans, minus black pudding, minus tattie scone………. in other words, we arranged subconsciously to have a great Aussie grilled breakfast.

Suggested reading: How to cook the perfect tattie scones.

I am sure the home cooked tattie scone has endured, probably hundreds of years+, so this article ponders all the nuances of this traditional Scottish breakfast. I love it that the author (Scottish) loves hearing the family squabbles downstairs as an essential part of preparing to prepare the tatties………